Many hobbyists in the homebrewing community feel as though the craft brewing market is saturated with brewpubs and microbreweries that it's inevitably slated for collapse. Some argue that opening a brewpub or brewing company is not worth the risk, and that it's current rate of growth is unsustainable. By this same logic, New York City's massively successful Shake Shack burger joint would probably never have opened since there were already hundreds of hamburger restaurants in the city at the time, and the burger market share in New York was spread so thin. In 2004, Shake Shack took off.

Through my travels (I'm currently doing a half-year trip around Southeast Asia) I've had lots of downtime at airports and on buses to reflect upon these apocalyptic predictions and to consider the risks involved in my own brewing ambitions. Opening a Silly Sir brewpub and/or brewing company is a daunting, high-risk task that will require intense dedication, long hours, and serious commitment and consideration if it is to become the bustling hangout I envision. At this point, my role is almost exclusively that of a sponge - soaking up as much information as I can on how to successfully run, market, and sustain a viable business. Here's what I've learned so far in listening to podcasts, reading books, and skimming websites on the matter.

The Biggest Risk is to Not Take a Risk 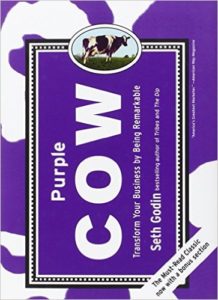 Seth Godin is a revered marketing guru that my partner Sara recommend I examine in order to learn some important lessons marketing. In his book The Purple Cow, Godin posits that marketing (as we know it in a traditional sense) is dead and that in order for a business to succeed in a world where people have more options than ever and less time and willingness to explore these options than ever it has to be a “purple cow”. It needs to stand out in some essential way, in a field of brown cows. That isn't too say it needs to be gimmicky, in fact, gimmicks are dangerous and unsustainable, but your product, service, or business needs to have the marketing built into it in order for people to notice and say wow. You need to be remarkable. Word of mouth spreads from early adopters - those looking for a new and exciting business to support - who sneeze out and infect the early and late majority which is where you make most of your money. Without their support, it's incredibly difficult to gain traction.

How to Reach a Tipping Point 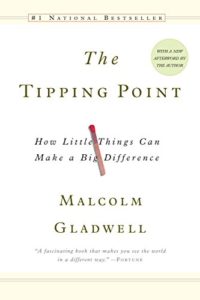 Maybe you've heard of, or even read works by Malcolm Gladwell. He is a best-selling author most famous for his book The Tipping Point where he explores what it takes for a business or idea to “tip” and progress from relative obscurity to mass popularity. Ideas, products, and services reach their tipping points when certain people (whom Gladwell refers to as connectors, mavens, and salesmen) work in conjunction to propagate their utility.

Gladwell distinguishes connectors as individuals with huge social circles and whom others like and trust. Connectors have no trouble connecting people into mutually beneficial relationships. They're tied to many social circles, from brewpub owners to producers, florists, architects, actors, and everything in-between and have a special gift for bringing people together.

Mavens, on the other hand, are people who have acquired a nearly obsessive database of knowledge about a particular interest (or group of interests) and are eager to share this information with others. They are information specialists. Mavens know precisely what's up and will happily advise you on where to buy the best hamburgers in the city because they've scouted them out themselves. They know the particular grade of beef in each burger, how restaurant A prepares the dish compared to restaurant B, whether the juices have been pressed out of the patties by the griller, the best day to visit said joint to avoid lines and because Ralph works that day seems to load the burger up with extra stuff. People listen to them because they're in the know and will not lead you astray. Seth Godin would refer to these people as possessing Otaku - Japanese for being obsessively knowledgeable.

Finally we have salesmen who are charismatic persuaders with a great knack for negotiation. They are likeable, and possess a certain confidence that people trust, and are drawn to.

To Gladwell, if you can draw in connectors, mavens, and salesmen as a substantial part of your early adopter base, you'll have an easier time spreading your idea or business to the masses. Ideally if you, or your business partners share some of these characteristics yourselves, you'll be in a much better position to draw customers to you cause

For a Brewpub, It's About Community 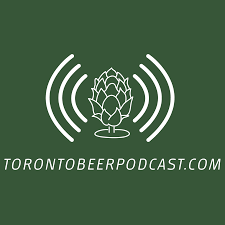 I've yet to really decide whether Silly Sir will be a brewpub, brewing company, or both. Perhaps I'll start as a brewpub and grow into a brewing company later, I'm not sure. In the Toronto Beer Podcast, host Chris Schryer examines the brewing industry of Toronto (usually with Mandie Murphy of Left Field Brewing). In listening to several episodes I've learned that part of Left Field’s success seems to come from them being community oriented. For example, Left Field has used the spent grain from their batches to bake dog treats that are given to customers, and proceeds from the sale of Wrigley Pale Ale are collected in order to expand and maintain a local dog park. By giving back to the community, Left Field establishes rapport and trust in the neighbourhood which draws in customers, increases sales, and increases the sense of community in the area. Bringing people together and strengthening bonds what beer drinking is all about.

Being the First to Tap the Blue Ocean 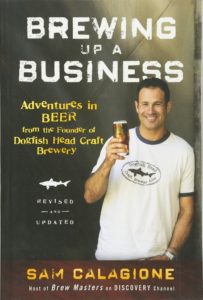 Sam Calagione of Dogfish Head is an inspirational auteur who's built a successful brewing company that I draw parallels within Silly Sir. Dogfish's motto is “Off-centered ales for off-centred peopl

e” which is an idea that resonates with me. His brewing company benefited from being one of the first to break the market with experimental beers. Still, if great experimen

tal beer was all I had planned for Silly Sir, I don't think would necessarily take off. It may become moderately successful, but would not achieve purple cow status. There's enough fantastic beer out there in the world for us to enjoy, and I am planning for Silly Sir to be something more, I'm just not ready to share exactly what I'm planning with the world just yet.

Really though, all I know for certain right now, is that I don't know much. I've got loads more to soak up before being ready to officially unleash Silly Sir beer to the world. I've got a vision that I will eventually execute with fervour and tenacity in order to become a truly remarkable brewing company. Until then, I will continue to investigate what exactly I can do to be remarkable and to disrupt the industry in a positive way while being true to myself.

Am I crazy to open a beer company in a rapidly expanding, arguably “oversaturated” market? What would you do differently? What do you think I'm overlooking at this point in the journey?

Published by: Matti in Reviews and Remarks, The Evolution

Sent from my iPhone