For the love of God – DON’T contract brew! Actually, you should. No you shouldn’t. But yes, it’s fun! No, it’s brutal…

I write this post with mixed feelings. Can you tell? I'm pretty confident that this post will get a few views, if only because I believe there are many who have at the very least "thought about it" (contract brewing) as a means of getting their feet wet in the brewing world.

What is contract brewing?

For the uninitiated, contract brewing is a term reserved to describe breweries who either don't have a physical location for brewing (and so pay another brewery to brew their recipes to specifications) or who do have a physical location but don't have the brewhouse capacity to keep up with demand. It isn't generally a term that garners much respect or consideration by those passionate about beer, and often for good reason: a good chunk of breweries who contract brew don't create their own beer recipes, instead, resorting to consultation with people they hire to create a recipe on their behalf. It feels cheap. They are a business first, and brewery second. Additionally, their involvement in the brew days vary, and some essentially aren't involved in the beer making process at all.

But that's not us.

We like to think of Silly Sir as "the cream of the crop" in terms of contract breweries and view this as a stepping stone towards a physical location. Whether that's an accurate self-assessment we leave to you, the customers. We care passionately about the quality of our beer and are heavily involved on brew days through packaging. As such, it is stressful when we notice our beer tastes suboptimal.

Our professional brewing story so far:

In the beginning, we locked in with our first of many brewing partners. The beer tasted great and when we first launched in LCBOs across Toronto, sales surpassed our wildest expectations. I think the reasons are threefold: 1) because our beer was great; 2) we were a brand new brewery with a new, intriguing product; 3) because our bright orange packaging really stood out. Many LCBOs were blown away with our sales (especially since we launched a lemongrass ale - a beer we designed with refreshing, summer-like qualities - in a Canadian January). Things were looking good. 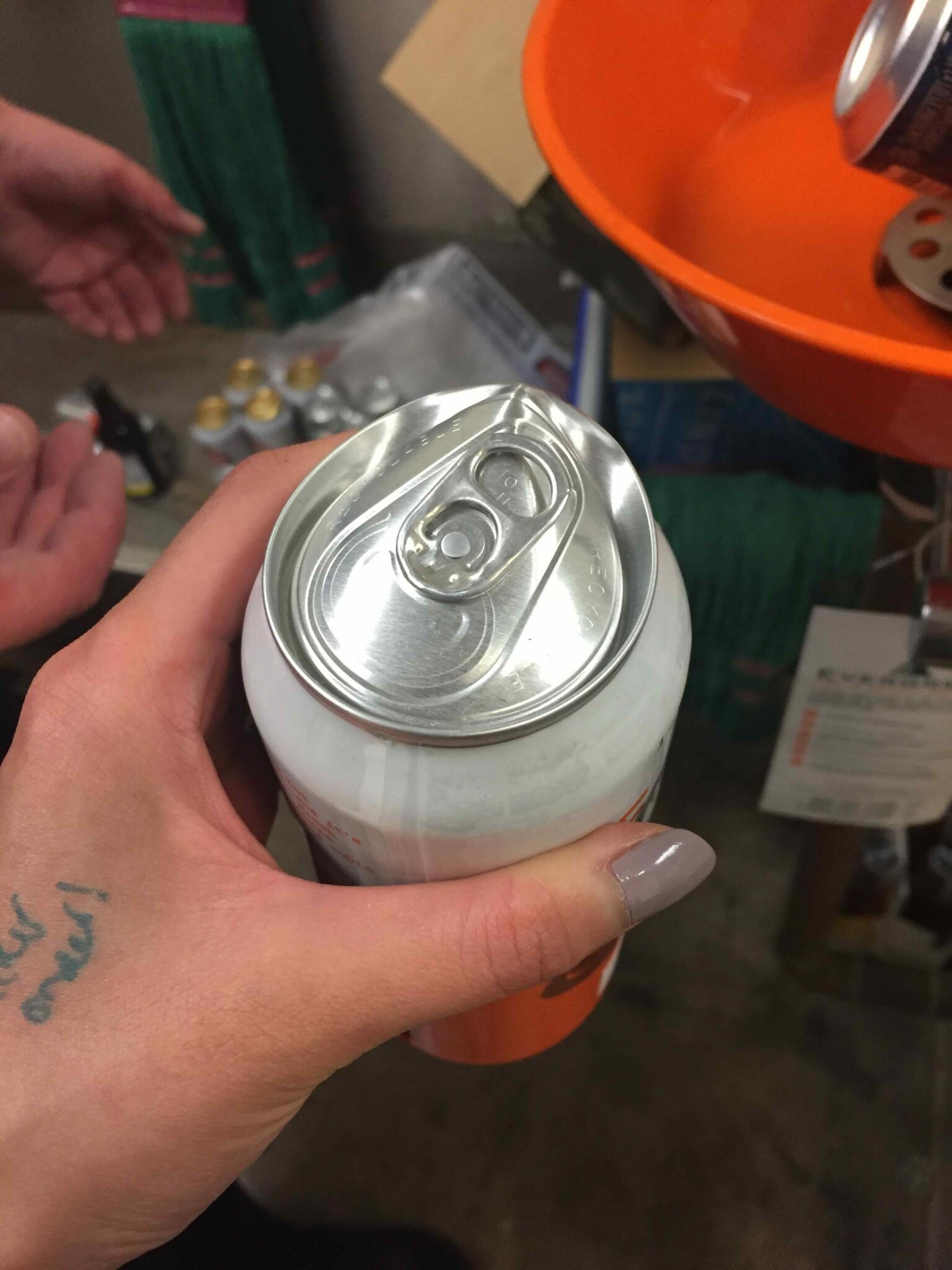 Reports came in that some cans of Easy Tiger on LCBO store shelves were ballooning out under pressure, and some were even bursting. We investigated the issue and learned that  Easy Tiger was experiencing a diastaticus issue. What this means is that the yeast that was used to ferment Easy Tiger would, given enough time and warmth, continue to ferment the remaining sugars in the beer. Because the cans were sealed, the CO2 they were producing as a part of their metabolism had nowhere to go and resulted in a highly pressurized can. Diastaticus issues are actually surprisingly common in the beer industry but should be acted upon with urgency, and as an emergency to be remedied immediately.

Practically all beer has long-chain residual sugar that the yeast cannot metabolize into CO2 and alcohol, however, a yeast experiencing diastaticus issues can.

I want to be clear: Easy Tiger was, of course, safe to drink, but because the cans were under high pressure - they weren't safe. Also the taste of the beer didn't meet our standards. Unfortunately in just our first few months of operation, we had no choice but to recall our first batch - a product that was selling well, and to high praise. Fortunately, product that was refrigerated or sold in stores with high sales never experienced issues, but product that was stored unrefrigerated at stores with slower sales saw ballooning cans. We wondered why sales had come to a standstill at some stores - I'm sure customers saw the ballooned out cans and rightfully thought; fuck that.

We should have found a new brewing partner then and there.

Instead, we were assured that they had the yeast issue under control. We should have moved on, but figured that this shit happens. They reimbursed us for the product we had to recall.

But then it happened again, with the second batch. We drove our car to all stores listing our product, from Hamilton, to Newmarket, to Scarborough and back in order to recall all remaining cans. We soon learned that this issue wasn't just affecting our brand, but most if not all of the brands of beer our brewing partner was brewing. The LCBO demanded to know where we were brewing our beer and had some choice words with the brewery involved in this catastrophe. I could go on and on. We had no choice but to look elsewhere for brewing partners.

Enter Cool Beer. We loved brewing at Cool. Not only were they very communicative, and diligent, but they also brewed our beer to specifications, and seemed to really care about the quality of the product. Additionally, their packaging line ensured our beer was pasteurized, which means that the beer had incredible shelf life. After several successful batches, we were suddenly hit with news of their sudden embracing of the controversial, and regrettably politicized "buck-a-beer" program. They were in the beer world headlines, and promotional photographs of Doug Ford moving boxes of Cool Beer product. We decided to leave Cool both to take a stand against buck-a-beer, and also because we felt disrespected - nobody warned us about this. Yes, we also figured taking a stand against Cool could be good PR, but we had no idea how crazy it would get.

Ultimately, the attention we received in our response to Cool was overwhelmingly good. It was also bad.

Most people seemed to appreciate our stance, and we were overwhelmed with the support that was sent our way. What hurt was that a vocal minority considered our moving to be disingenuous, thinking it was nothing more than a PR move. Through it all, I even began convincing myself that we were being disingenuous, which in retrospect, feels crazy. If you know Sara and I, you know just how principled we are. We did not expect to be in the news, but when the Toronto Star asks for a statement, of course you say yes.

Currently, we're brewing at Junction Craft Brewing Co. Junction is a company that both produces high quality product, and who we are aligned with philosophically. They embrace the fact that we want to be present and involved in the brew days without resistance and take whatever concerns that may arise regarding quality seriously.

Still, we are frustrated.

We don't, and cannot have complete control. We can't be around for every transfer, because brewery schedules change. Junction doesn't have the capacity to pasteurize just yet and so our shelf-life is not as high as we'd like (few craft breweries have the capacity to pasteurize). We can't yet measure Dissolved Oxygen because DO meters are extremely expensive (dissolved oxygen in beer really hurts shelf life). Because of this, we have to trust that Junction's processes to avoid such issues are sound - and we do.

Our foray into contract brewing has been a thrilling adventure. I'm proud of all that Silly Sir has achieved so far, we've been more successful than I'd ever anticipated. When our beer is good, it's great. But we cannot control what happens once the LCBO has it. Will they put it in the fridge? Will it sit in the back for weeks before it actually sees a shelf? Will it be on one of the bottom shelves and be passed over by customers? Will it sell at all, or just get old? These are things we have little control over, and we rely on LCBO for 90% of our sales. The best we can do is communicate the importance of refrigeration (particularly for Easy Tiger) when we do spot checks or tastings.

In fact, what prompted this post is that I just got back from an LCBO store tasting which I did with some staff. We try and have LCBO store staff sample our beer before (and sometimes after) they agree to purchase cases. The tasting went well, and they liked both Sun Bear and Easy Tiger, however, when I sampled the can of Easy Tiger, I could tell it wasn't at its optimal state. It was a can I'd hurriedly grabbed from our fridge. I looked at the can and noticed it was one that had been packaged months ago. It was an old batch - it still tasted "alright" but as somebody passionate about the quality of our beer, it pained me when I realized what we were sampling. Most people aren't trained to notice when the beer they're drinking isn't at its peak. But I notice. And I want to respect the consumer. To me, these things matter. Every detail counts.

Despite our best efforts (we invest lots of money to store and ship our beer cold), our beer isn't always consumed in its optimal conditions. Most beer isn't. This is why we really cannot wait to have our own physical space. A space where we can (should our stars align) turn a profit without reliance on LCBO sales. A space where we're more intimately linked with because the draught lines are meters away from us. Where we can control every detail, and ensure it's always being served fresh, and in the right glassware, and at the right temperature.

Please, prospective contract brewers, be warned: contract brewing is more stressful than it is fun. You will encounter issues and headaches. It will take up a lot of your mental energy. There will be tons of unpredictable issues you'll have to sort out, and unless you're an incredible business person, you won't make a whole lot of money. It takes a lot out of you - your time, your sanity, your wallet.

But you will learn a ton about the industry, and about sales.

When people connect with your product, it can really feel worth it (if only for a moment). When festival attendees insist that yours is the best beer at the festival, you know they're wrong but you still beam. When you read positive beer reviews for your brands online, and when you sell swag to absolute strangers, you'll think, "how are we kicking so much butt?".

But make sure you have a Sara.

Published by: Matt in Brewing, The Evolution