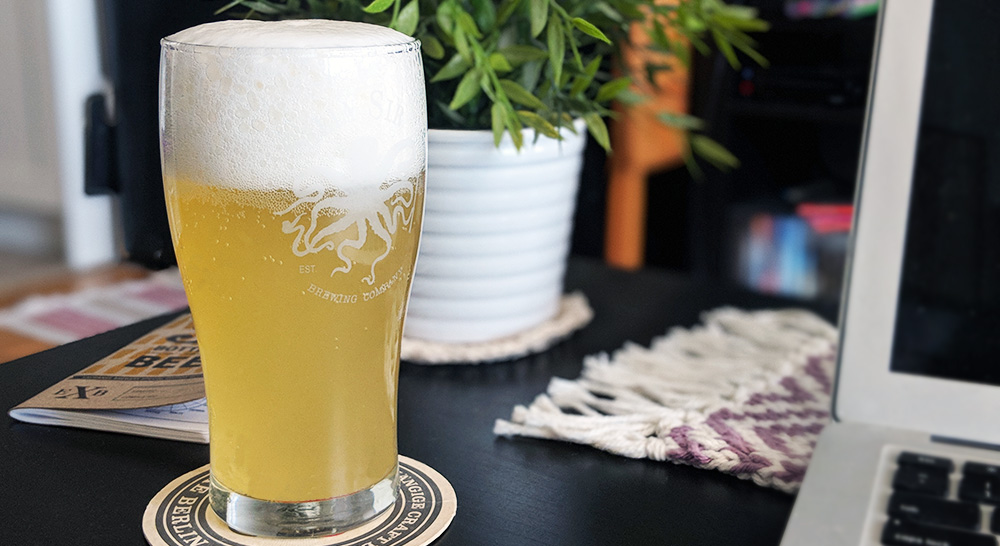 So to celebrate this year's collaboration brew theme of "exotic", we brewed a fairly traditional German hefeweizen with our secret exotic ingredient... JACKFRUIT. Jackfruit beer?! It has been named: "They Jacked Meihoffinbrau". Matti proudly named this beer. But I am yet to decide if I am proud or disappointed by his choice.

WTF is a jackfruit?

Well, my dear North American friends, jackfruits are found all over South East Asia and India (and surrounding countries). We ate it a lot during our travels and it's a fruit my parents grew up eating in Malaysia.

It's a pretty massive thing to find hanging off the side of trees. It is carefully cut open to reveal many pieces of flesh with a large seed inside. Harvesting this flesh is no child's play. We once bought half a jackfruit and tried to harvest the fruits ourselves and found a huge sticky mess all over the kitchen for dayyyssss. The skin is incredibly sticky and I'm sure animals have died getting stuck in a jackfruit that has fallen on the ground and opened to rot. What a way to go...

Anyways, jackfruit has a hand full of uses. It is often cooked when it is young and unripened, in curries mostly, and takes on the flavours of the spices. It a good meat alternative because it has a similar hardy texture. The seeds can be cooked and eaten at this point too because they haven't become hard.

But the best (arguably) use of jackfruit is to eat the ripened fruits fresh. They are very sweet and aromatic. If I told you there is a fruit that's flavour combined are those of a strawberry + banana + mango, that'd be the jackfruit.

This is the good part, ripe and sweet.

Here in Toronto, it is possible to find fresh jackfruit in many Asian supermarkets. You could also go for some canned jackfruit, or other jackfruit flavoured desserts. One nice snack is dried jackfruit chips. Do try.

We designed a beer around the flavours of this magical fruit. Specifically, we wanted to highlight its banana flavours by using a traditional wheat beer yeast and bring out strawberry flavours with Huell Melon hops.

Patiently waiting for those rolling bubbles.

After the boil we pitched one package of Safbrew WB06 dry yeast.

The beer is currently sitting at 18degrees C fermenting away! We expected the dry yeast to take some extra time to start its activity, but nope. The lag time was less than 15 hours, it showed airlock activity and krausen forming at around 15 hours.

What about the jackfruit?!

Aha good catch! I haven't added any jackfruit yet. We will add chopped fresh-frozen jackfruit post-fermentation, along with some potassium sorbate, to cut fermentation of these precious sugars, and let you know how that goes!

I learned that jackfruit is far from in season right now, so we added a combination of fresh jackfruit that we had frozen previously and 2 cans of canned jackfruit rinsed from as much of the syrup it was preserved in. We pureed it in a Vitamix until smooth. Then back in the freezer to burst the cell walls for maximum juiciness!

The next day, I took the frozen jackfruit puree and heated it to pasteurize it to avoid any bacteria that might be interested in hijacking my precious brew.

I quickly learned that heating a sugary thick liquid is a dangerous business. I walked away from this bubbling, scalding, sludge with a few minor burns. It was quickly cooled with the coil wort chiller then funnelled into a muslin bag, tied off tightly, and left to float about in the keg for a week to render its flavour and carbonate.

Wow, this came out better than expected. The colour is right on the nose for a hefeweizen, light yellow and cloudy. The flavour is super fruity and sessionable. The jackfruit really comes out in both the aroma and the taste.

What would I do differently next time?

Be patient and wait until we can get our hands on actual liquid yeast. We wanted to use WYEAST 3068 but our local homebrew shop had run out. This WB-06 was good, but not as phenolic/estery as we'd like. The beer was also a little thinner than we'd like so perhaps we'll mash a little higher and also add some Vienna or Munich malt. Never a bad idea.

Hi dear sillysir
I’m Mathew from India I hope you’re doing well honestly I search google for how we can make jackfrut beer I’m searching for the possibility finally I found your article I’m happy to see this honestly I love this concept I like to part of this maybe I can help with more amount of jackfruits we can try to sell this jackfruit beer in my country.
Honestly I don’t know how much it will work but we can try together.
Your Mathew jd

Hello Mathew from India!
We’d be so excited to see jackfruit beer sold in India when we come visit one day in the future! We will attribute the entire Indian jackfruit industry to you sir!

I’m in Thailand and we have lots of JF in my city. I really want to try this recipe when I have time. However, I’m still wondering how you melted those pieces of JF before stepping into pasteurization.

This question might be silly or a bit difficult to understand as English is not my native language, but I hope you get my point. 🤞

Hello! I put the pieces of jackfruit in a blender with a little bit of water to cut it into the smooth texture you see in the pictures, before pasteurizing. It helps if the jackfruit is very ripe and soft.

I hope this helps!